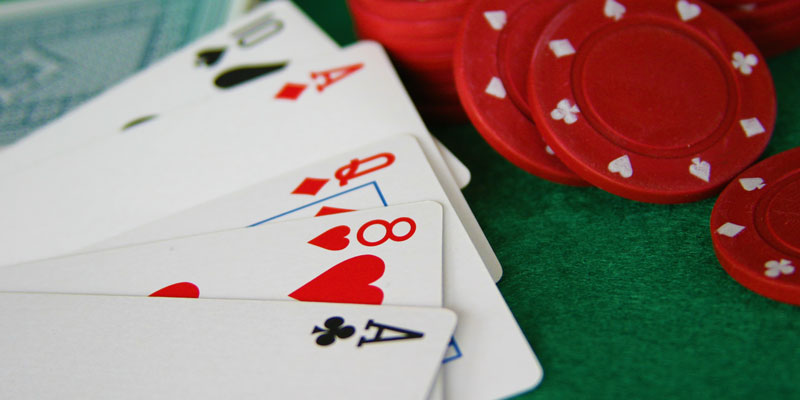 Poker is a game which people now find synonymous with gambling in general. From smoke-filled saloons where cowboys chewed tobacco and shuffled decks to luxurious casinos, poker has been a part of our lives since the early 19th century.

Today, with so many players around the globe, playing one simple Texas Hold ‘Em game isn’t enough. There’s a high number of variants around, many of which players haven’t even heard of. Now, there are games which use community cards, which split the pot or don’t, and with different hand ranking systems.

One such variant is California High/Low Split. It’s a draw poker game where the pot comes in two halves — low and high. It uses California ranking rules, which you first need to learn in order to play this game properly.

Considering the low pot, California High/Low Split applies the California Lowball rule, also called Ace-to-Five. As you play the game with five cards, the best possible hand you can have is the wheel: A-2-3-4-5 (as you can see, it contributed to the name of the rule). In the California rule (which people used to call Asian rule before), the Ace is always considered as a low card. Also, when it comes to Straights and Flushes, you don’t count them against your hand. In this game, logically, the California rule applies only for the low pot, whereas the highest hand in regular poker rankings wins the high half of the pot.

Here, the aim is to get five different cards, which you rank by the high card. For instance, a hand of A-2-3-6-7 is a Seven-high, and it’ll defeat an Eight-high (A-2-4-5-8), regardless of the values of other cards in the hand. And when the highest cards match, you proceed to the next in line. Consequently, in the example above, if we replace the Eight with a Seven, the second hand will win, as Five is better than Six.

If you end up with a hand which doesn’t contain five differently-ranked cards, you apply inverse poker rules. Basically, Pairs will be better than Three of a Kinds, and a Full House will lose to a Three of a Kind. Just like with single cards, a Pair of Twos is better than a pair of Threes, and so on.

California High/Low Split is “an 8-high or lower” game. This signifies that, in this poker variant, to be eligible for the low pot, your highest card can be an Eight. Conversely, if all players receive a hand with the lowest card being Nine or higher, the high hand will take the whole the pot.

The best possible card combination in the game is called ‘steel wheel.’ It’s A-2-3-4-5, all having the same suit. For the low pot, your high card is Five, which is perfect, and for the high pot, you’re playing with a Straight Flush. But even if this is the best hand, it’s not unbeatable — you can still lose your money.

For instance, let’s imagine there are three players remaining in the fight for the pot — you, with the steel wheel, John, and Susan. John can have a better Straight Flush (5-6-7-8-9, for example). This won’t let him play for the low pot, but he wins half of all the money for himself. The other opponent, Susan, can have a differently-suited wheel, which would make the two of you split the low pot in half. Effectively, although this is highly unlikely, you can have the best hand in the game and still win only a quarter.

In California High/Low Split, there’s one single Joker card in play. Players call it a bug and you can utilize it both as a wildcard or as an Ace. Let’s consider a round in which your opponent’s holding a Straight of 2-3-4-5-6. Your hand reads 3-4-5-6-Joker. This hand will allow you to scoop the pot (win both halves of it). Here’s why.

In this instance, the Joker will replace a Seven, and your hand will read 3-4-5-6-7, which is clearly better than your opponent’s Straight. What’s more, when you move on to the pot where the lowest cards win, there are no Straights. Therefore, the Joker becomes an Ace, and your hand becomes A-3-4-5-6. Again, you’ll win, as your Ace is better than their Two.

As a consequence, the Joker is obviously the best card in the game, as it gives you the ability to manipulate your hand into winning the whole pot by yourself.

In this game, there are no players who need to chip in the small and big blinds. Instead, every player (the game allows for a range between three and eight people) needs to pay an ante — a small amount you have place into the pot before receiving your cards. Following that, five hole cards are dealt facing down, which makes it harder for you to predict what hands your opponents might have. After you receive your cards, there’s a first round of betting, during which you can call, check, fold, or raise (or re-raise someone else’s raise). If you fold, you forfeit your hand and the ante you paid at the start.

Next, there’s the drawing round where you can discard some of your cards (or none, which would be standing pat). Here, you can discard up to three of your cards. If you do that, the dealer will give you replacements from the top of the deck, as you have to hold five cards at any given moment. This rule changes only if you’re holding an Ace or the Joker. If that happens, you’re allowed to discard all of your other cards (four of them). With that in mind, you should know that when you do that, other players will know that the one you’re keeping has to be one of the two aforementioned cards.

Finally, when everyone finishes their turn of discarding cards, there’s another betting round. The game ends there. A showdown of hands takes place, first competing for the high pot and then checking who has the lowest hand. Since you only have two rounds to place bets, there’s no space to implement any betting limits or betting structures like in other draw poker games.

Lastly, this game has a ‘cards speak’ rule. Effectively, this means that there’s no declaration. Before the betting starts, you don’t have to declare which side of the pot you’re playing for. So after you see what cards you’ve received, you can compete for either or both pot halves.

Having in mind that the game consists of only two betting rounds and one drawing one, California High/Low Split represents a rather fast-paced draw poker game. There are no betting limits imposed, so bluffing makes for an essential part of this game.

Thanks to its quickness, it’s an interesting game that keeps you on the edge of your seat. Sadly, there are games with much higher popularity. Consequently, it won’t be easy finding a poker table in a casino which runs this game.

Although it’s a fairly simple game once you learn how to read your hand while evaluating it towards both pots, it takes time to learn that. So make sure you get a bit of practice at first and don’t go in guns blazing and chips betting. After all, it’s a fun game you can enjoy with your friends or in private poker tournaments. So good luck and enjoy!